Riley and Rowan's Medieval Times Adventure for Their 9th Birthday 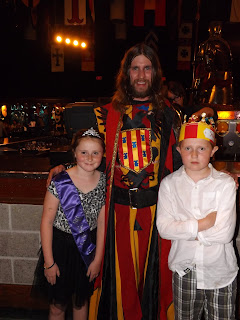 9 years ago we began a kind of magical tradition.  For Gabe's 9th Birthday we went to Medieval Times Dinner Theatre in Toronto.  It was beautiful and wonderful and magical.  We yelled ourselves hoarse for our knight, we ate dinner with our hands.  Gabe declared that it was "THE BEST BIRTHDAY EVER", and it would prove to be the last birthday that we celebrated with him, making it all the more special, wonderful and magical in our memories.  If I close my eyes I see his beautiful little face red with excitement as he screamed for our knight. 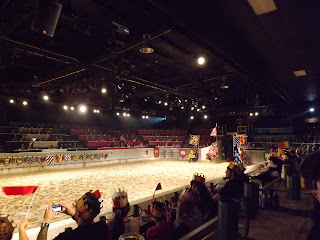 Three years ago we asked Gracie if she would like to celebrate her 9th birthday at Medieval Times.  She had seen the pictures and video of Gabe's ninth birthday.  I think that part of the reason that she wanted to go was because it was so much fun, and also because I think it helped her to feel closer to Gabe.  Gracie brought a friend with her, and we had another amazing time.  I will not lie, there were a few moments that I was very thankful for the darkness, it helped to hide my tears.  I had tears for Gabe, but I also had joy because it was a beautiful memory of him, and a memory we were making for Gracie.  Gracie and her friend had an amazing time, kind of like we knew that they would. 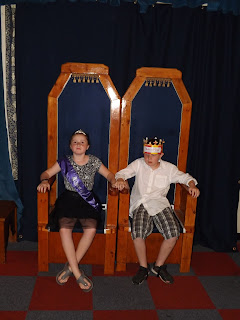 Once again we had a wonderful magical time at Medieval Times, and as usual the Lindsay's were almost the last ones to leave the castle.

We have visited the Toronto Castle approximately 6 times now, and the Myrtle Beach one twice.  It is our goal to hit every single one of the castles.  I'm not sure when we will get to them all, but I do know that we will be back again and again!